Mammography is undoubtedly the basic breast imaging method. Currently, mammography is the only method proven to reduce mortality in breast cancer, and it is used for breast cancer screening as a national policy. The advantage of mammography is that the entire breast is covered in a single image, and objective observation is possible. It is relatively safe and can be performed on several women in a short time. On the other hand, there are disadvantages such as radiation exposure, pain caused by pressure, and false-negative results, especially in dense breasts. Limitations in imaging are present in any technique; a major factor leading to false-negative results in a mammogram is breast composition. In mammography, density reflects differences in x-ray absorption and can be divided into three major parts: fat, soft tissue including mammary tissue, and calcification. Because the x-ray absorptivity of mammary tissue and breast cancer masses are considerably close, it is difficult to distinguish breast cancer mass from adjacent or overlapping mammary tissue and identify it. This results in false-negative results owing to a masking effect. The risk of developing breast cancer is also higher in dense breasts. In response to the question of whether mammographic breast composition is associated with the risk of breast cancer, the 2022 edition of the Breast Cancer Treatment Guidelines edited by the Japanese Breast Cancer Society also makes a statement that the grade of evidence is convincing.

More than 20 years have passed since mammography screening began in Japan as a national program. Accuracy control is extremely important in screening and even before the implementation of mammography. The Japan Central Organization on Quality Assurance of Breast Cancer Screening (then known as the Japan Central Committee on Quality Assurance for Mammography) played a central role in ensuring thorough quality control in radiographic techniques of mammography and reading systems. However, the initial education and dissemination of understanding of the benefits and disadvantages of breast cancer screening and the limitations of diagnostic imaging have been delayed.
There was a lack of understanding among the common female population regarding breast composition. In 2016, the media pointed out the masking effect of the dense breast. It was decided that the Japanese Society for Breast Cancer Screening would address this issue and that a working group would be established with related societies to discuss the issue. Thus, a “Dense Breast Control Working Group” was set up to work on its definition, dissemination, and other issues. This challenge applies not only to screening but also to clinical practice. However, this was not a major problem in clinical practice, because the patient was directly explained by the physician and other tests, including ultrasound, were performed in the clinical setting. Hence, this issue is considered to be a greater challenge in screening.
Originally, the mammography guidelines in Japan were developed from translations and modifications of BI-RADS produced by the Radiological Society of North America. From the first edition of mammography to the third and subsequent editions, breast composition was classified into four categories: fatty, scattered, heterogeneous dense, and extremely dense. The denser the composition, the higher the risk that the lesion will be masked by mammary tissue. Therefore, it is recommended that this configuration be noted at the beginning of the report. This statement is made with regards to all mammograms, regardless of whether they are performed in the screening or a clinical setting. However, it has been noted from the outset that there is some inter- and intra-observer variation with respect to the classification into these four breast compositions. While the typical examples are good, a few are uncertain in their classification. The working group's research was passed on to the Health, Labour and Welfare Policy Research Grants, Research for Promotion of Cancer Control Programmes, and research on providing appropriate information on breast cancer screening.
Although these four classifications themselves remain unchanged, the research group decided that it is necessary to determine a concrete classification method that can be evaluated more objectively to minimize variation as much as possible.

Breast composition (breast density) is an evaluation of the amount and distribution of mammary tissue (degree of fat mixing), which was to be classified into four categories: fatty, scattered, heterogeneous dense, and extremely dense. “Dense breasts” refers to both heterogeneous and extremely dense. As mentioned above, from the first edition of the Mammography Guidelines to the third and subsequent editions, the composition with the highest amount of mammary tissue was referred to as "dense". To avoid confusion with the newly defined term "dense breasts," the term "extremely dense" was used. These four configurations are explained below (Figure 1). The determination of the composition is done using a mediolateral oblique (MLO) image and referring to a craniocaudal (CC) image. 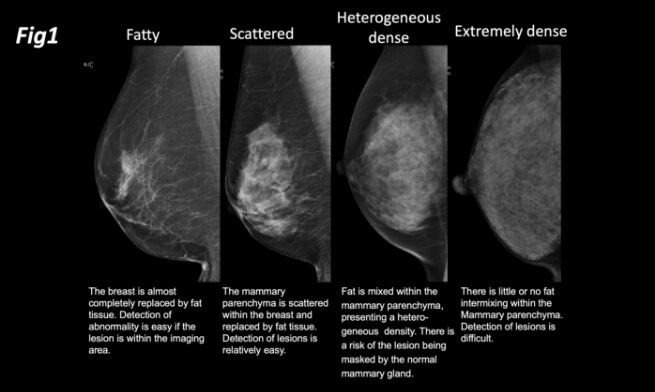 1）Fatty： The breast is almost completely replaced by fat tissue. Detection of abnormality is easy if the lesion is within the imaging area.
2）Scattered： The mammary parenchyma is scattered within the breast and replaced by fat tissue. Detection of lesions is relatively easy.
3）Heterogeneous dense： Fat is mixed within the mammary parenchyma, presenting a heterogeneous density. There is a risk of the lesion being masked by the normal mammary gland.
4）Extremely dense： There is little or no fat intermixing within the mammary
parenchyma. Detection of lesions is difficult.
Although the term "extremely dense" has been changed, the definition of the above categories remains unchanged. It also corresponds to the four categories used in BI-RADS.
In this issue, we have decided to present a concrete method to evaluate the above four breast categories more consistently between and within observers. That is, the denominator is the area where mammary tissue is thought to have originally been in place, the numerator is the present mammary tissue, and the ratio of the two determines the four classifications (Table 1, Fig. 2). 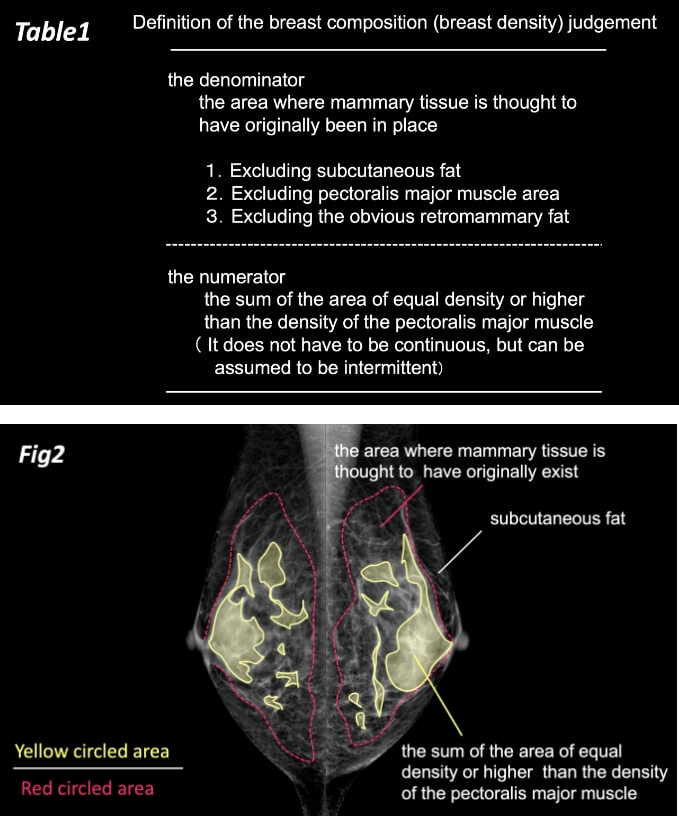 The denominator is the area excluding the retromammary fat, subcutaneous fat, and the pectoralis major muscle area. The numerator is the sum of the area of equal density or higher than the density of the pectoralis major muscle in the denominator. This percentage is assumed as “fatty,” “scattered,” “heterogeneous dense,” or “extremely dense,” if it is less than 10%, from 10 to 50%, 50 to 80% or 80% or more (Figures 3 and 4), respectively. 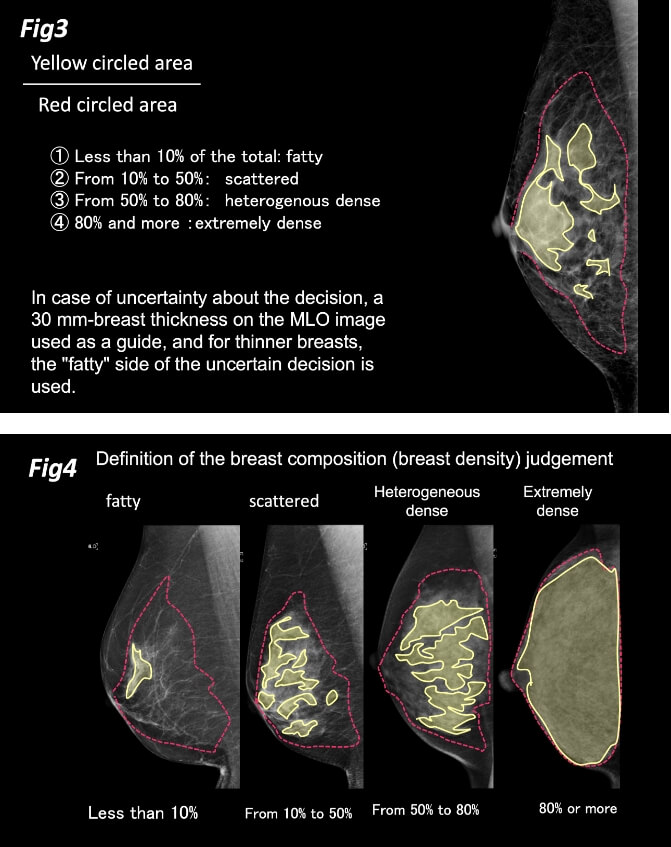 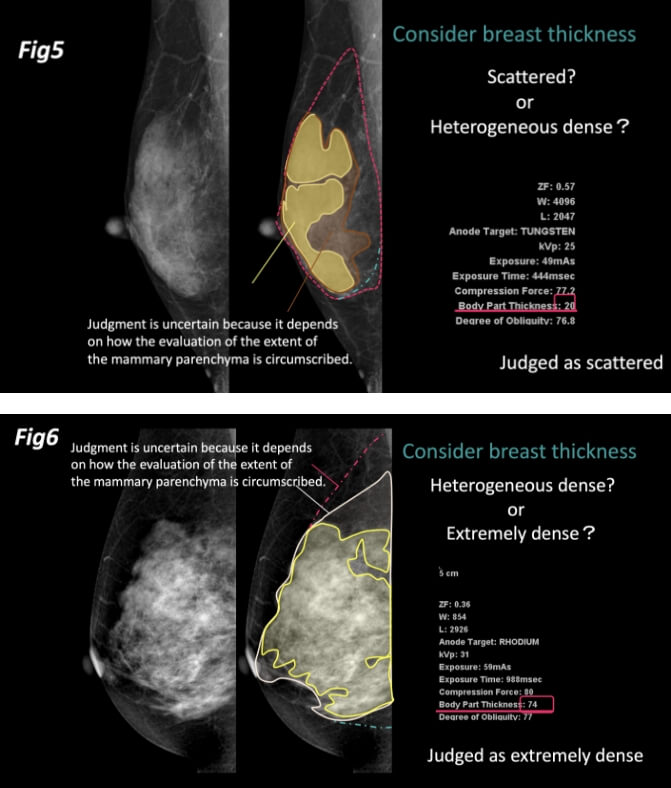 This is based on a report that the detection rate of breast cancer is not low for breasts classified as "dense breasts" if the breast thickness is less than 30 mm1）. If the judgment can be made easily without any particular difficulty, it can be classified as it is. Breast thickness need not be always used; the thickness on the mammogram should only be used when there is any difficulty in making a decision.
If there is a difference between the right and left breast, the higher judgment is used to determine the breast composition (breast density) in situations such as when one judgment per person is required for screening. The determination of breast composition may be carried out for each breast. It is also recommended that each breast be evaluated in clinical reports. The term "dense breast" can be erroneously misinterpreted as a disease. It is important to firmly understand that these four categories only indicate breast composition regarding the amount and distribution of mammary tissue (degree of fat mixing) within the breast. 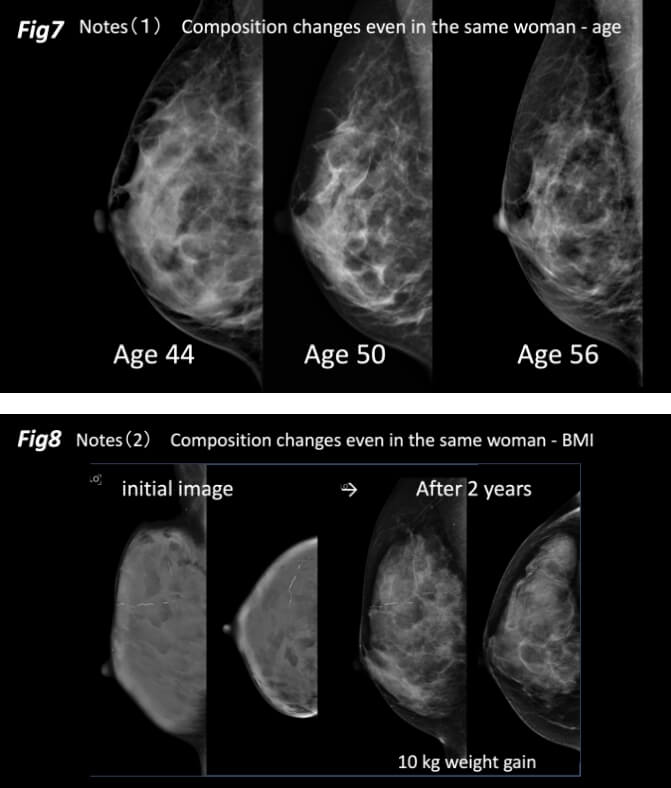 There are two patterns of the dense breast with low detection of lesions. Note that although we tend to assume that a dense breast is thick with many glandular lobes, it also includes cases in which the breast is originally very thin and has little fat and less contrast (Figure 9).
In addition, technical factors can change the judgement of breast composition. It is important to note that the image processing of mammograms can change the apparent density. The density of the pectoralis major muscle is not always the same and varies considerably depending on the image quality processing. Therefore, standardizing the density of the pectoralis major muscle can impact the judgement of breast composition (Figure 10). 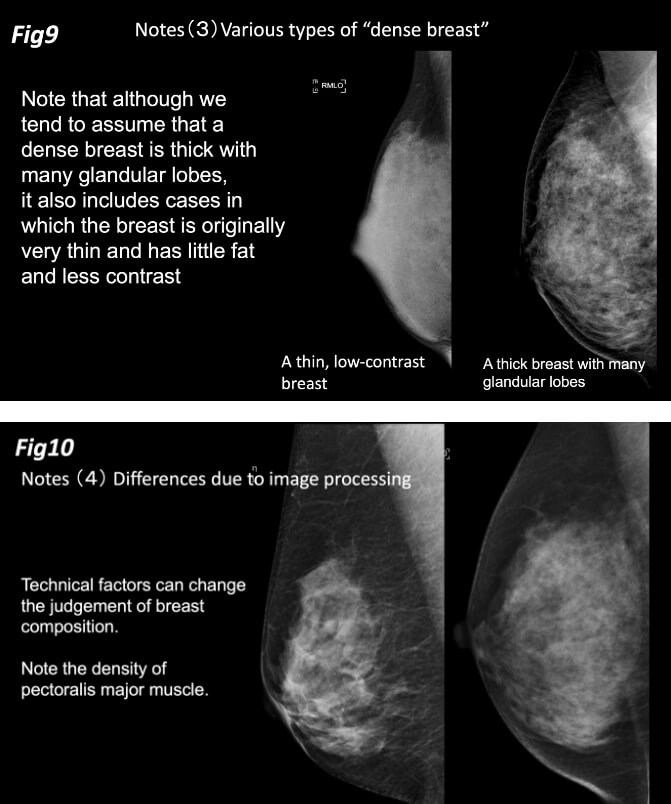 Furthermore, if there is any difficulty in judgment, the method of determining the breast composition by using a breast thickness of 30 mm as the boundary is good since it enables the judgment to be made numerically. On the other hand, since breast thickness can change with compression pressure, the judgment may change with the strength of the compression (Figure 11). If a woman with a 28 mm-breast thickness at 100 N compression were to have a 32 mm-breast thickness at 70 N compression, it is possible that the mammogram is between typical cases. In such a case, the reader is not sure about the judgment and judges the mammogram by breast thickness. Hence, the judgment of composition of the same breasts can be different.
It is also important to minimize inter- and intra-observer bias as much as possible, but no matter what method is used, a perfect agreement is not likely to be possible. Rather, it is preferable to understand that the judgment of breast composition is not as complete as such.
In the future, quantitative breast composition judgment by observers may be replaced by those using digital technology or artificial intelligence (AI). While there may not yet be many hospitals that incorporate AI for reading in a clinical setting, some have already adopted digital quantitative judgments. This proposal is intended to reduce the bias of visual qualitative judgments and is by no means a denial of digital technology. We are also aware that there are limitations concerning quantitative determination by digital technology. In any case, it is important to understand that breast composition is not absolute, and it should be documented as a prerequisite before reading the mammogram, taking into account the masking effect. 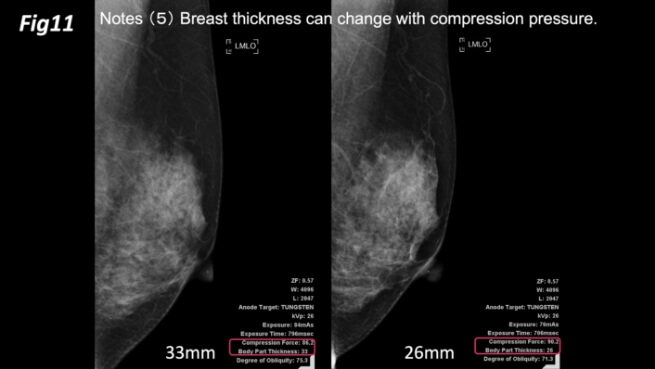